###Second-order self-presentation: a conceit on conceitedness

I used to take great pleasure in writing these “About Me” minibios, primping my digital appearance for hours on end. In my misspent youth I agonized over a Xanga, a MySpace, a LiveJournal, a Facebook… leaving behind a digital footprint so contrived you can see the pedicure. Social networking? Pshaw! I just wanted a billboard for my posturing, and this was some prime ad space! Clearly, not much has changed: nathanielraley.com is their rightful heir and ultimate legacy, here to uphold a long tradition of stilted fustian and painstaking affectation.

But wait, why do I confess this so freely? Sure, it anticipates criticism on that front and denies would-be critics their private smugness (“this guy’s a superficial windbag and he doesn’t even know it!”) Still though, it’s definitely an odd gambit; everybody knows that there are strong incentives to keep your motives hidden from others.

These incentives are especially strong when your main motivations are attracting attention, courting public affirmation, or winning the approval of others. B.F. Skinner noted that “…we do not give credit to those who are conspicuously working for credit. We give credit generously when there are no obvious reasons for the behavior” (Skinner, 43). For this reason, he says, we are more impressed by someone’s mental math or their impromptu speech; in arithmetic done on paper or in reading from a teleprompter, the banal sequence of steps that give rise to the impressive behavior—the “controllers”—are glaring.

This fact of basic psychology—the inverse relationship between the “visibility of control” and the credit owed—creates those incentives “to conceal the controllers [of our behavior] to avoid losing credit, or to claim credit not really due us” (45). An unfortunate corollary of this fact is that humans tend to glorify the inexplicable and undervalue the understood; “we are likely to admire behavior more as we understand it less” (49).

Six years ago, chatting online with a friend, I wrote:

“…I think we both unconsciously fear our potential being reached, so we put forth just enough effort to get by, but not enough [for anyone] to say we tried.” “It’s a universal affliction… everyone wants to study and say they didn’t and be seen as innately better.”

Four-hundred years before that, Baldassare Castiglione, a courtier-cum-author in the royal palace of Urbino, wrote that success in court life depended on sprezzatura, a studied nonchalance, “so as to conceal all art and make whatever is done or said appear to be without effort and almost without any thought about it” (Castiglione, 32). Thus, everything you did—from performing a hard-won feat to dispatching a difficult chore—had to look easy and natural. By dissembling one’s true efforts and feelings, sprezzatura was nothing less than that “mysterious source of courtly gracefulness.”

And sprezzatura isn’t just for Renaissance nobility; a recent article in Time magazine suggested that the essence of hipster _cool_dom is something quite like its aristocratic predecessor. “Everything about them is exactingly constructed to give off the vibe that they just don’t care,” the author tells us. Though I wouldn’t readily self-identify as one, I think that the hipster aesthetic is hard to achieve and therefore hard not to admire. It’s like a mashup-style remix of culture that, in the hands of a master craftsman, results in a derivative patchwork far more compelling than any of its constituents. To really pull this off, you have to manage two completely incompatible goals: controlling your elaborate, sophisticated appearance while at the same controlling the implication that you have better things to do than to worry about your appearance. We all do it to some degree, but they have made a veritable art form of self-presentation.

Sprezzatura may be a socio-cultural incarnation of something in evolutionary biology called the handicap principle. Think of the tail of a peacock or widowbird, the giant horns of an elk, a bowerbird’s bower, the neck of a giraffe (perhaps even the hipster’s “fixie”): the thinking goes that these seemingly maladaptive traits evolved because they are reliable signals of good quality in a potential mate. Because they are costly for the animal to produce and maintain, they suggest that their possessor is so genetically healthy and biologically fit that he can afford to waste physiologically important resources on these phenotypic extravagances. In the same way, humans can signal their employability with college degrees (effortful and expensive). They can signal their wealth through luxury items, items that confer exclusivity, or leisure activities (Veblen goods). I hypothesize that sprezzatura, taken to an extreme as it is in hipster subculture, is a reliable signal of something like memetic fitness. Cultural capital? Intelligence?

We all like to portray ourselves to good advantage, especially in highly public situations (e.g., online). If you’re as self-critical as I am, though, and afraid of being exposed, try turning it in on itself! By becoming self-critical of my own self-criticism—swallowing my pride like a self-conscious Ouroboros—I have united art and artifice in a sort of recursive n-tuple-bluff, making myself a moving target that is almost impossible to hit.

Whatever you do, do not be ashamed of your insecurities; social-worry is not a superficial part of our humanity— au contraire, it is fundamental! Social indifference is chimerical if it isn’t pathological; you see it on lists of autism symptoms or in caricatures of genius—unkempt, socially aloof, bumbling about; the absent-minded professor whose lofty thoughts are elsewhere. Many great thinkers may well have lacked a brainspace partition for social processing, somehow able to dedicate the whole organ to the carriage of rarefied ideas, but not all: Nikola Tesla, the mad scientist par excellence, betrayed social preoccupations by openly loathing the overweight and the poorly dressed (Cheney, 2001). In the scathing obituary he penned for his former employer Thomas Edison, he began by denouncing the man’s social practices: “He had no hobby, cared for no sort of amusement of any kind, and live in utter disregard of the most elementary rules of hygine.” Lord Byron, too, was famously beautiful, but he curled is hair at night and was given to extreme dieting, bulimic purges, and hypergymnasia (Baron, 1997). 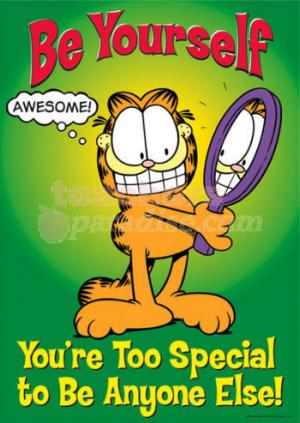 When you’re a kid, you got assailed with these messages exhorting you to “be yourself” and not to care about what others think. This sounds very nice, and we all nodded our heads and smiled, but we did so not out of acceptance or understanding of this sage-seeming advice. We nodded because nodding is the socially appropriate response to adult admonitions in situations like these; nodding tends to make adults happy, and happy adults have tended to coincide with positive outcomes. We nodded when someone said to us, “Do not care about what others think,” but we did so precisely because we cared about what they thought!

Embrace it! The very things that separate us from other animals—complex cognition, language, and symbolic culture—are thought to have arisen from social processes. Though there’s no widely-accepted definition of intelligence (Neisser et al. (1996) reports that when two dozen prominent psychologists were asked to define it, they gave two-dozen wildly different answers), some signs of “intelligent” behavior in the animal kingdom are empathy, theory of mind, mourning, rituals, and the use of symbols. Most apes exhibit these traits in one form or another.

Indeed, almost every theory about the evolution of intelligence proclaims a social basis: the social brain hypothesis, which states that “primates evolved large brains to manage their unusually complex social systems” (Dunbar, 2009) is based on the observation that in higher mammals, large and complex social groups correlate quantitatively with brain size and qualitatively with the development of a theory of mind, the ability to understand the thoughts and emotions of others. In “smart” animals, like chimpanzees and corvids, you see not only large group size, but alliance formation, post-conflict behaviors, and social facilitation of foraging techniques (Seed et al. 2009). The social brain hypothesis has recently found support in an agent-based model linking information processing to group size: “larger groups can only be achieved at the cost of more sophisticated kinds of information processing that are disadvantageous when optimal group size is small” (David-Barrett & Dunbar, 2013).

Human sociality goes much further than any of its great-ape counterparts, according to Andrew Whiten, who credits our species with a “deep social mind.” By this, he refers to a distinctively human intersubjectivity: the ability to infer the mental states of others while reciprocally and simultaneously enabling those others to infer one’s own mental states. This concept goes a long way toward explaining self-awareness, or egocentric perspective reversal (viewing one’s own mental states as if from the standpoint of others); we gain awareness of our own minds through the mutual reflection: my mental states as reflected in yours, and yours as reflected in mine, resulting in a relational mind that cannot be confined to a single individual’s skull.

If you are still reading this and for some belief-beggaring reason you want to know even more about this website’s whys and wherefores, see this blogpost and my “site” page.