In A Mathematician’s Lament, Paul Lockhart roundly decries the way our school system sucks the soul out of mathematics; what was forced down most of our throats was an insipid husk of repetitive calculation, plug-in formulae, and rigid formality, all of which we were called upon biweekly to regurgitate. Most painful for him to see is the way geometry is taught:

"All metaphor aside, geometry class is by far the most mentally and emotionally destructive component of the entire K-12 mathematics curriculum. Other math courses may hide the beautiful bird, or put it in a cage, but in geometry class it is openly and cruelly tortured. (Apparently I am incapable of putting all metaphor aside.)"

If you haven’t read the Lament yet, definitely stop what you’re doing and take the next 30 minutes to do so; if you have any interest at all in mathematics or education, it will be one of the best-spent half-hours of your life.

Having deep, abiding interests in both of these things, I was personally moved by the piece and feel a renewed enthusiasm for shapes and numbers, an enthusiasm that was all but aborted by my own early math education. Yours almost certainly was too! Here’s what I mean… 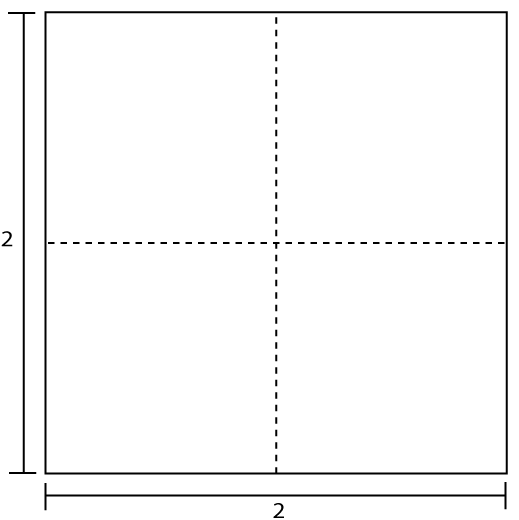 Consider a line segment 2 units long. Now, make a square where each side is one of these segments. We have “squared” our 1D segment and we got a 2D shape 2 units long by 2 units wide. That’s 4 square units total, because $22=2x2=4$. Thus, we say that the area of our square is 4 square units! (Area is just an arbitrary measure of what you get when you compare the shape to squares of a fixed size, in this case 1 square unit.)

We can take these 4 square units and arrange them however we want: if we put them all four in a row, we create a rectangle 4 units wide by 1 unit tall. It has the same area as the square; we can see this by inspection or by noticing that $2\times 2=1\times 4$. It is true for all rectangles and parallelograms that _area = length x width_.

Instead of memorizing a formula, how could we find the area of a triangle?
Is there a way we can cut the square to make triangles? Yes, absolutely. Cut a square diagonally and you get two triangles. Are these the same size? Yes! So if two equal parts make 1, we know they have to be half of the original. Thus, the formula you had to memorize in grade school makes some obvious, visually verifiable sense. You were told, “base times height divided by 2” or “one half base times height”. Well, now you see that “base times height” gives you the area of a rectangle, and “divided by 2” gives you exactly half of the rectangle’s area, corresponding to a triangle.

Teaser: how much of the box is taken up by each of the triangles below? 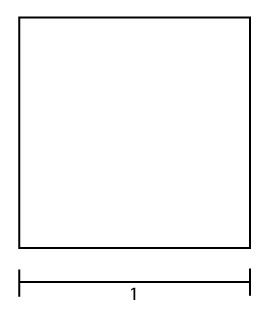 The Diagonal of a Square

Now then, let’s take just one of our square units (from earlier). Here’s a question: measure from corner to corner diagonally, and what do you get? 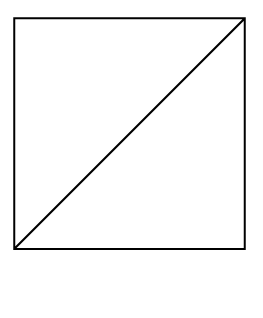 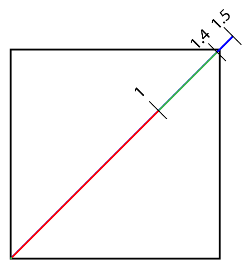 Let’s zoom in a bit… Uh oh, we’re not quite there. 1.415? Close, but zooming in a bit more we can see we still overshot it. How long is this lousy diagonal line?! It’s length doesn’t seem to be representable in ordinary integers or fractions… 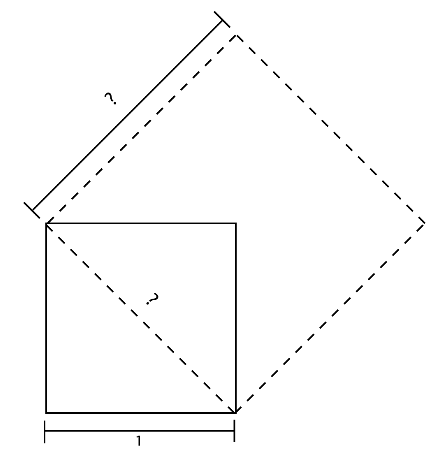 Have we made some mistake? This extremely regular shape has already produced for us a bit of a quandary; we’re just trying to measure the length between a square’s two corners! It’s as if Well, whatever the length is, let make a square out of it too. Two squares might be easier to compare 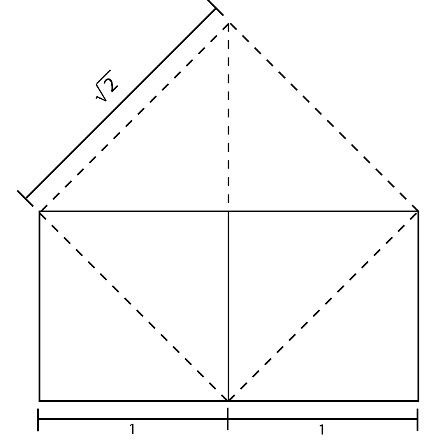 Take a minute to look at the two squares. Notice anything? It looks to me like half of our original square fits inside this new square exactly 4 times. 4 halves make 2 wholes, so 2 original squares = 1 new, diagonal square.

Let’s see if we can find that diagonal now! We know that two squares whose sides are 1 add up to form a bigger square, whose side we don’t know (besides knowing it’s close to 1.4). Let’s call that side length d, for diagonal. So, we can say $12+12=d^2$.

Our next guess is $1.41\bar{6}$, so we can do this process over again: divide 2 by our guess, and take the average of the quotient and the divisor:

If we were to repeat this process forever, we would converge on the square root of 2, which is the length of that diagonal. But until we do an infinite number of these averages, we won’t know exactly how long the diagonal of a square is! Unbelievable! Chances are, you’ve already whipped out your calculator and found that $\sqrt{2} = 1.414213562...$, so our averaging method worked well! After just 3 iterations, we’re off by only 0.000015%! What does it mean, though, that this “irrational” hole to infinity emerges when we try to do something as basic as measure a square? What does it mean?

I don’t know about you, but no one ever showed me what $\pi$ (pi) was all about. I mean sure, as far as numbers it is culturally unique in having, for whatever reason, made its way onto t-shirts and bumper stickers like some kind of geek heraldry. we hear over and over again that this 3.14 is some number equal to ~22⁄7, and know it has to do with circles because we had to memorize that $A=\pi r^2$ and $C=2\pi r$. We may even know that it’s “the ratio of the circumference to the diameter,” which is simply a restatement of the formula $\pi=\frac{2r}{C}=\frac{d}{C}$. But what is $\pi$, what does it look like, and what do these equations really mean? Paul Lockhart discusses the educational disasters that can accompany this topic:

"To help students memorize formulas for the area and circumference of a circle, for example, [teachers will recite] this whole story about “Mr. C,” who drives around “Mrs. A” and tells her how nice his “two pies are” (C = 2πr) and how her “pies are square” (A = πr2) or some such nonsense. But what about the real story? The one about mankind’s struggle with the problem of measuring curves; about Eudoxus and Archimedes and the method of exhaustion; about the transcendence of pi? Which is more interesting... using a formula that someone handed you without explanation (and made you memorize and practice over and over) or hearing the story of one of the most beautiful, fascinating problems, and one of the most brilliant and powerful ideas in human history? We’re killing people’s interest in circles for god’s sake!"

So let’s talk about $\pi$, not because we have to memorize it, but because it is weird and fascinating and very much worth thinking about for its own sake!

Above, we talked about how, when you take a square’s diagonal and divide by its side, weird stuff happens (you get $\sqrt{2}$). Even weirder stuff happens when you measure around a circle (circumference) and divide by the distance across (diameter): you get $\pi$. Humans have been refining their calculations of this value since at least 1850 BC. People first noticed that, for any given circle, the distance around a circle is about 3 times the distance across. But as the figure above illustrates, this is not quite right: 3 diameters around almost gets us there, but leaves us coming up short by somewhat more than 14 hundredths. But how much more, exactly?

Around 250 BC, Archimedes came up with a new approach: because we can measure straight lines but not curves, just stick the circle inside a shape made from only straight lines (i.e., a polygon), and increase the number of sides to get closer and closer to a circle. Then measure the straight lines around the outside.

Here’s an example of Archimedes’ influential technique: put a circle with a diameter of 1 exactly inside a square: Our first guess for the area of a circle is the number of sides of the square times the length of each one (the perimeter of the square), which in this case is 4. To home in our $\pi$, we keep increasing the number of sides and multiplying by the length of each one, as shown above for four more polygons (a hexa-, octa-, dodeca-, and 24-gon). Notice that, even when approximating with a 24-sided shape, our guess comes up pretty short (3.15966).

Using this method, Archimedes proved that 3.1408 < π < 3.1429. More than 1800 years later, humans were still using this technique: the record in 1630 for calculating digits of π was 39 (this record still stands as the most accurate manual geometric calculation of π).

If you want to calculate these yourself, you need to know the side length of your n-gon. This can be calculated using the tangent function, opposite over adjacent. Since the radius is 1 in our case, we just do $tan(\pi/n)$ where n is the number of sides.0 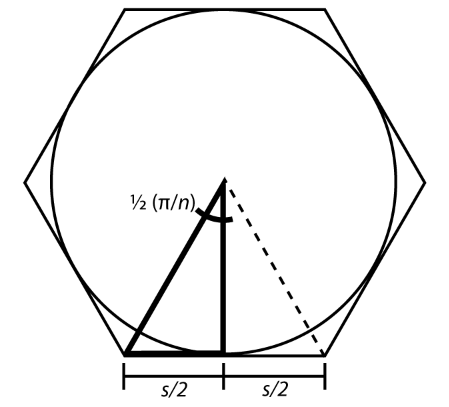 This kind of calculation results when a pattern of numbers, being summed or multiplied repeatedly, converges on a mathematical constant (or some fraction thereof).

Though an Indian mathematician named Nilakantha discovered the idea of using an infinite series to calculate π around 1500, they weren’t used in the West until the 1600s. Old Nilakantha’s  series is actually pretty good:

After 4 terms it’s at 3.1452…! The first known Occidental series was this one, found by Fracois Viete:

Notice that it is less than ideal because it depends on the square root of two, another difficult number. In the 1670s, the Gregory-Leibniz series was found:

And in 1987, the Chudnovsky brothers came up with this bad boy, which produces about 14 digits of pi per term!

Area of a Circle

One last thing for now: since we talked about pi, and since we talked about the area of squares (and triangles), we should definitely end with the area of a circle. For this, you probably memorized the formula A=πr2, but what does this mean? It means that if we take the radius, make a square out of it, and multiply that square by pi, we have the area. Can we connect this to the way we found the area above, i.e, length-x-width or base-x-height? Absolutely!

Imagine unpeeling tiny layers from a solid, filled-in circle and laying them side by side until there are no layers left (as in the picture below). The first layer you peel off is a circumference (its length is 2πr) the next layer is a tiny bit shorter, and the next is shorter still, and so on… Eventually, you will have unpeeled your whole circle to form a triangle with a base as long as the radius of the circle and a height as long as the circumference: this is the top triangle in the picture. Well, what’s the area of this triangle? (Base x Height)/2, right? So that’s radius times circumference divided by 2, or (2πr x r)/2 = πr2 = Area!

Smart Drugs: Special Topics in The Neurobiology of Learning/Memory I The Math of Secrecy: RSA Cryptography (and Shapes You Can Draw!)